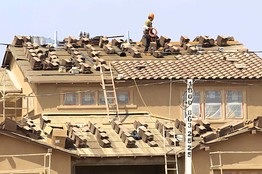 Big money is starting to wager on housing.

Other investors seem to be making the same bet. Shares of home builders are up 30% since the end of the third quarter, as measured by the Dow Jones index tracking those shares, topping a nearly 10.5% gain for the Standard & Poor’s 500.

A worker lays shingles as construction continues on a residential home in Carlsbad, Calif., Sept. 19. 2011.

These stocks rallied during certain periods over the past three years, only to fall again when hopes of a housing rebound proved unfounded. However, home builders haven’t outperformed the broader market by this much in a quarter since the third quarter of 2008.

“We turned bullish on housing. A rebound is coming,” says Andrew Law, chief investment officer at $10 billion hedge-fund firm Caxton. He expects that home prices and construction will rise in 2012.

Bulls received ammunition last week when the National Association of Realtors said sales of previously occupied homes in the U.S. rose 4% in November from October, topping expectations. The inventory of previously owned homes listed for sale fell 5.8% to 2.58 million, the lowest level since May 2005. That came on the heels of data that residential construction surged in November.

“The housing-price bottom is probably in sight,” Goldman said in a December 15 report. Housing prices might decline by 3% next year before beginning a rise, Goldman says. The bank predicts gains of 30% over the following 10 years, not taking inflation into account.

It is too early to declare an end to the housing difficulties that began five years ago and led to trillions of dollars of losses and a global economic downturn. U.S. home prices fell 3.4% this year as of October, according to the Standard & Poor’s Case-Shiller home-price indexes released Tuesday. Inventories could rise next year if banks move more properties through the foreclosure process.